What a record player taught me about UX

You are here: Home1 / Weekly Thoughts2 / What a record player taught me about UX 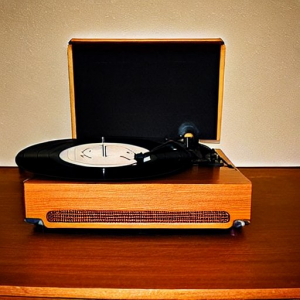 What a record player taught me about user experience

There is a rather self-explanatory idea that a technology’s capabilities change how we use it.

Take this example: in the early 2010s, cellular towers didn’t have the bandwidth for us to stream videos on the go. Because of this, phones were used primarily for communication, gaming and sharing photos over social media.

As bandwidth grew, we were able to use our cell phones as streaming devices. Apps like TikTok grew out of the newfound ability of streaming videos on the go.

Audio streaming has revolutionized how we consume music. According to my Spotify Wrapped, I listened to 13,000 minutes of music and 1,300 artists. I know no one asked, but my Spotify listening personality is “Early Adopter.” Putting in my AirPods and walking to class is my morning ritual. Streaming allows me to get inspired by artists from around the world and put them in unique playlists.

I’ve been on an interesting ride since I was given a record player and Abbey Road last week. The record player is a simple, electromechanical technology. The turntable rotates at a constant speed, with information picked up by a stylus running through the grooves on the vinyl. Only a limited number of songs can fit on a record. There is no shuffling music because the record plays in order from outside to inside. You can’t switch seamlessly between artists. And, skipping songs is a fine motor task of placing the needle correctly.

This is a far cry from what I’m used to on Spotify, which grants me so many branching paths. What playlist will I listen to next? Will I choose the next song or hit shuffle? Will I listen in my home or on the go? I’ve found that sometimes these choices cause me stress. The worry of making the ‘best’ decision takes away the pleasure in listening to music.

To my surprise, I like the user experience of my record player. There is only one path: put the record down and listen to it top to bottom, just as the artist intended. Over the past week, I have discovered songs I never heard before. And despite always skipping on Spotify, I haven’t skipped a song on vinyl yet. The set down and play nature means it is more relaxing to me.

Of course Spotify is great and most users would choose it over the limited capabilities of a record player. I love its portability, depth of content and inexpensive price. But, most Spotify users my age haven’t used a record player.

In a world where technology offers more choice and personalization, the record player is a great example of how the absence of decisions can lead to a simpler, more pleasurable experience.

Welcome to the future of Web
Scroll to top